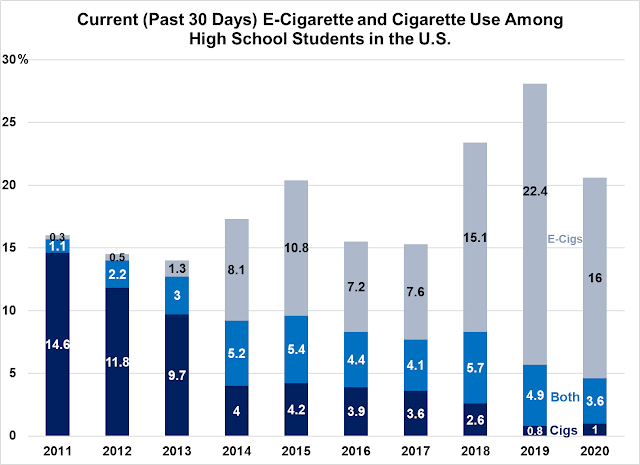 Data from the 2020 National Youth Tobacco Survey (NYTS)
(charted at the left) confirms the CDC finding that “19.6% of high school
students (3.02 million) … reported current (past 30 day) e-cigarette use.” (here).  This is a reduction in high school vaping
from peak prevalence of 26.3% (or 4.1 million) in 2019.  The survey also indicates that high school
cigarette smoking declined to 4.6%.  That’s good news, but there’s also some bad in
the following table.

The increase in frequent vaping, which is suggestive of
dependence, is likely to be exploited by anti-vaping activists, but the NYTS
data must be viewed in context.  For
comparison, let’s run similar numbers for high school cigarette smokers.  In 2018, there were 1.31 million of the
latter, 973,000 of whom were underage. Of that subgroup, 234,000 smoked
frequently (20-30 days in the past month).
In 2020, there were only 714,029 current high school smokers, 561,375 of
whom were underage, and only 93,000 of the latter group smoked frequently.

The substantial drop in all of these smoking numbers, even as
frequent vaping increased, is positive from a public health perspective.  Health risks for any high-schoolers who
become addicted to vaping nicotine will be a tiny fraction of the risks
associated with smoking.

Another major finding from the new NYTS is that high school
vapers may not be vaping tobacco/nicotine.
As I noted before, most public health officials ignored the important
disclosure in the 2018 NYTS of high
rates of marijuana vaping.  This oversight was highly irresponsible in
view of the fact that contaminated illegal marijuana vapes caused considerable
lung injuries and deaths.  Marijuana
wasn’t mentioned at all in the 2019 NYTS questionnaire, but it reappeared in
the 2020 survey.  The next chart shows
that marijuana vaping has become even more popular; for example, 83% of 1.17 million frequent high school vapers used
marijuana in 2020. 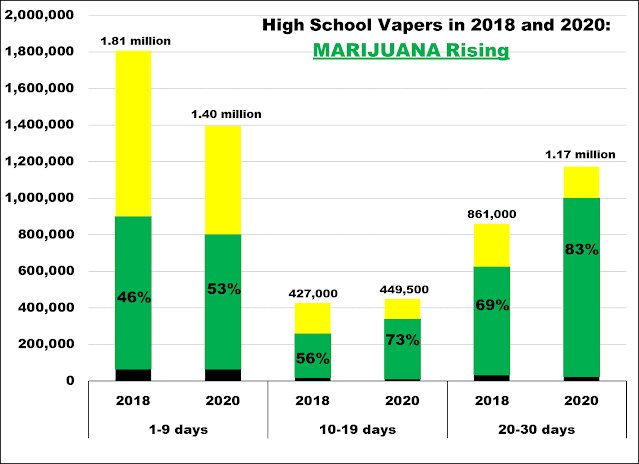 While no one should be comfortable with any underage teen
drug use, moral outrage about nicotine use is entirely misplaced.  Instead, it should be directed at the use of
alcohol and marijuana, addictive substances that are clearly associated with teen
injuries and deaths.