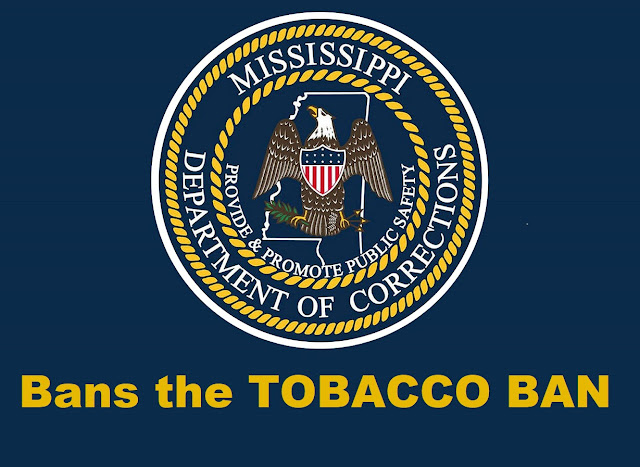 Cain
reported that the ban has forced inmates to pay “as much as $500 a pound” for
cigarette tobacco.  The new policy, he
said, “will save [them] money and the state will make money,” and, “By selling
[cigarettes], we are breaking the contraband tobacco trade, designating smoking
areas outside, clearing the air inside for the majority of inmates who don’t
smoke, reducing inmate contraband violations, and recouping for taxpayers some
of the dollars it takes to run prisons.”

Profits
from tobacco sales will fund the system’s re-entry program and its high school and
college credit courses.

On
January 26 the California Assembly passed a bill that would ban all tobacco
products in state prisons (Assembly Bill No. 384).  According to sponsor Tim Leslie (R-Tahoe
City), the bill “is a win, win, win for California.”  But the ban may be a loser for everyone else
concerned, including prisoners, staff and the prison system.

According
to Leslie, about 80,000 California prisoners smoke.  At 1½ packs per day and $3 a pack, prison
sales of cigarettes in California is worth $131 million.

One
hundred million dollar markets just don’t disappear with the stroke of a
legislative pen.  They transform, and
often in ways that don’t please prison officials.

First,
the California prison system will lose the revenue generated by sales of legal
tobacco products.  But over-the-counter
revenue lost is under-the-table revenue gained, as smuggling takes over and
entrepreneurs compete for the lucrative tobacco market.  In Colorado prisons, where tobacco
prohibition was instituted four years ago, an $11 can of Bugler loose tobacco
generates $5,000 in hand-rolled cigarettes—a 45,000% markup.  In other words, the Colorado ban spawned an
instant black market serviced by prisoners and their families, guards, teachers
and supervisors.  Officials have
conducted 154 investigations – at considerable additional cost — and made
dozens of arrests.  All because Colorado
officials chose in effect to ban nicotine, the consumption of which is
absolutely legal everywhere in the US except behind bars.

Absolutely
legal.  And almost absolutely safe.  Nicotine is among the most powerful of
addictive substances, but it is not the reason that smokers die.  In fact, nicotine itself is about as safe as
caffeine, another widely consumed addictive drug.  It is the other 3,000 agents in tobacco smoke
that are responsible for the diseases that kill smokers.  Smokers who switch permanently to other,
safer forms of nicotine, including smokeless tobacco products, live longer and
healthier lives and don’t pollute the air around them.

There
is a very simple alternative to a complete ban on tobacco and nicotine:
corrections officials should offer smokers alternatives in the form of
smokeless tobacco.  Smokeless tobacco
satisfies smokers and serves as an effective permanent substitute, because it
rapidly delivers a dose of nicotine comparable to that from smoking.  For comparison, nicotine medications provide
only about one-third to one-half the peak nicotine levels of tobacco products,
which is unsatisfying for many smokers.
In addition, medicinal nicotine is expensive and designed to be used
only temporarily.  All of these reasons
are why nicotine replacement has a paltry 7% success rate among American
smokers.

Smokeless
tobacco use is vastly safer than smoking, which is entirely consistent with the
stated health goal of Leslie’s bill.  Our
research documents that smokeless use imposes only about 2% of the risk of
smoking.  The only consequential adverse
health effect from long-term smokeless tobacco use is oral cancer, but even
this risk is much lower than that associated with smoking.  In fact, the average reduction in life
expectancy from life-long smokeless tobacco use is only 15 days, while the
average smoker loses almost 8 years.  For
further context, the risk of death from long-term use of smokeless tobacco (12
deaths in every 100,000 users per year) is about the same as that from
automobile use (15 deaths in every 100,000 users per year).

Newer
smokeless tobacco products deliver the nicotine kick smokers crave and they can
be used almost invisibly.  Spitting, once
the stigma of smokeless tobacco use, is nonexistent with these products.  New products are neatly packaged as wafers or
small pellets of tobacco.  Some modern
products are the size of breath mints and completely dissolve during use,
leaving no tobacco residue.

Data
from Sweden show that smokeless tobacco can easily substitute for smoking.  For 50 years men in Sweden consistently have
had the lowest smoking rate and the highest smokeless tobacco rate in Europe.  The result:
Rates of lung cancer – the sentinel disease of smoking – among Swedish
men have been the lowest in Europe for 50 years.  World Health organization statistics reveal
that Swedish men have the lowest rates of lung cancer among 20 European
countries.  In the US smokeless tobacco
is already working for many Americans. Statistics from the Centers for Disease
Control and Prevention (CDC) show that 1.5 to 2 million former smokers have
chosen this option on their own.

In
summary, when prison systems provide smokeless tobacco as a substitute to inmates
who smoke, they accomplish several goals.
First, they promote the health of smokers by offering a cigarette
substitute that is 98% safer for users (because smokers who switch to smokeless
tobacco reduce their risk for all smoking-related illnesses, including mouth
cancer).  Second they ensure the health
of nonsmoking inmates and staff (because passive smoke is eliminated).  Third, they restore the prison tobacco market
to its rightful balance, in which revenue from tobacco sales is removed from
the black market and returned to the correctional facility.  In other words, corrections officials can
meet both health and fiscal goals by providing an environment that is
smoke-free, not necessarily nicotine and tobacco-free.