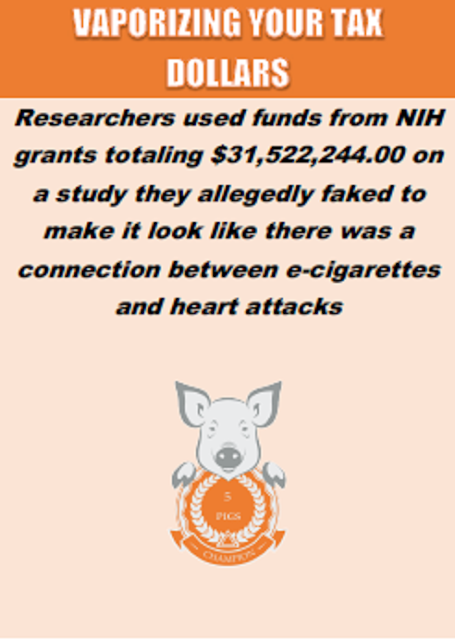 U.S.
Senator Rand Paul just released his Festivus Report
2020,
describing some $55 billion in “government waste”.  One stand-out example he cites is a fake
heart attack study authored by Dharma Bhatta and Stanton Glantz (exposed by me here, here and here).

Senator
Paul mentions that “the NIH’s Office of Research Integrity has a process for
banning individuals for ‘research misconduct’.”
Actually, I called for a federal investigation in June 2019 (here), and I laid out
all of the evidence in a medical publication (here).  Despite the fact that one of the co-authors
of that study retired early this year, an investigation is justified and
overdue.

Following
is Senator Paul’s verbatim description of the fake study:

“In
the summer and fall of 2019, reports began popping up that a new fad among
youth, vaping, was hospitalizing people.
According to The New York Times, reporting in August 2019, ‘[M]ore
than 215… [patients] with mysterious and life-threatening vaping-related
illnesses [were being treated] this summer.’
That same summer, the Journal of the American Heart Association (JAHA)
published a bombshell article entitled ‘Electronic Cigarette Use and Myocardial
Infarction Among Adults in the US Population Assessment of Tobacco and Health.’  To produce it, researchers at the University
of California, San Francisco used three grants from the National Institutes of
Health (NIH), totaling $31,522,244 to fund their work.  There’s just one problem: according to peers,
the researchers faked the study!

“Just
a month after it was originally published, one researcher at the University of
Louisville, Dr. Brad Rodu, caught the flaws and was able to determine that a
majority of the sample  population  (just 38 people) had heart attacks years
before they started using e-cigarettes – a decade on average – and alleged the
UC,  San Francisco researchers conducting
the original study faked results.  How
was Dr. Rodu able to make this allegation?
The UC-SF team accessed a public repository of information to populate
their study, so he simply went back and looked at the original data.

“Dr.  Rodu, evidence in hand, galvanized prominent
tobacco researchers from 16 prestigious institutions around the world, including
NYU, Yale, Stanford, the University of Michigan, and the University of Chicago,
as well as institutions in England, Canada, and Greece, to send a letter  to the publishing journal demanding a review
of the article for its veracity.

“Particularly,
the cadre of researchers requested JAHA retract its publication of the
study given ‘the analysis provided…strongly suggests that the published
findings are unreliable and that there is a case to answer.’  According to research guidelines, retraction
would be appropriate in the face of evidence of the sort that Dr. Rodu
discovered – that is, ‘clear evidence that the findings are unreliable, either
as a result of misconduct (e.g. data fabrication) or falsification (e.g.
image   manipulation) or honest error
(e.g. miscalculation or experimental error).’

“Ultimately,
JAHA conducted the review and retracted the study.

“This
is hardly the first case of researchers allegedly faking studies, and I promise
it will not be the last.  In fact, the
NIH’s Office of Research Integrity has a process for banning individuals   for ‘research
misconduct.’  According to ORI,
“[R]esearch misconduct is defined as ‘fabrication, falsification or plagiarism
in proposing, reviewing research, or in reporting research results,’ excluding honest
errors and differences of opinion.

“So
do the UC, San Francisco professors fit this description?

“It’s
actually impossible to figure out, at least for now.  As part of the retraction process, JAHA
requested the researchers ‘conduct their analysis based on when specific
respondents said they started using e-cigarettes.’  Reasonable enough, right?  Well, when faced with that request, the researchers
said it ‘would require ongoing access to the PATH Wave 1 survey – a
restricted-use   dataset – and…[they]
have been unable to access that database.’
In other words, the UC-SF researchers are effectively claiming they
cannot back up their claims because their subscription to a database has
expired.

“Now,
if I were a professional researcher accused of research misconduct, and all I
had to do to clear my name was to access a dataset I had already accessed to
prove my work, I would do anything I needed to do so I could refute the claims
against my work.

“But
maybe that’s just me.”